A Fond Farewell To The QE2

On October 1st 2008 (one day ahead of schedule) the QE2 sailed into Cork Harbour for the last time ever. It berthed at the Cobh Cruise Liner Terminal and stayed overnight on Wednesday, sailing at 6 pm on Thursday. Cobh was one of seven ports of call for the QE2 on its farewell voyage of the British Isles after Cherbourg was dropped from the schedule because of northerly gales and the only port in the Republic of Ireland. 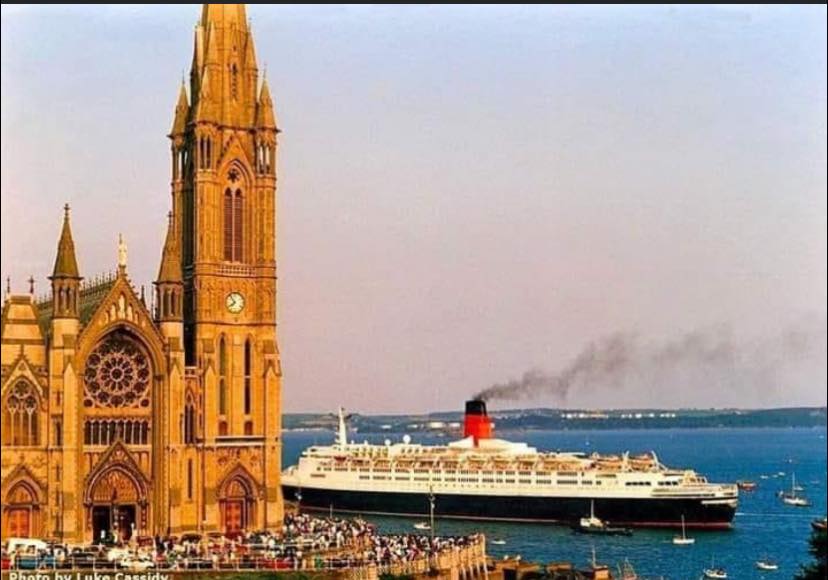 On 11th November it sailed from Southampton for the last time on its farewell voyage to Dubai. This 17 day voyage took passengers through the Mediterranean, the Suez Canal and the Red Sea to Dubai. Here the ship is now being refurbished and will be berthed permanently at the Palm Jumeirah from 2010 as a luxury floating hotel, retail, museum and entertainment destination.

Cobh Tourism wanted to mark this historic occasion and was anxious to create an atmosphere on the quaysides and hills of Cobh reminiscent of a bygone era as the Grand Old Lady of the Seas sailed out of Cobh.

To get a sense of what we wanted to create you should view a clip of the Lusitania on YouTube by following this link  http://youtube.com/watch?v=sURi21sJsWc.

Between 40 and 55 seconds into the clip you will see the liner departing from the quayside and hundreds of white handkerchiefs being waved.

Cobh Tourism commissioned over 3000 embroidered white handkerchiefs to encourage people to wave their hearts out and then keep the handkerchiefs as souvenirs of the day. The Port of Cork and Scotts Shipping Agents in Cobh supported this initiative.

On Thursday 2nd October just after 6 pm the QE2 was guided out of its berth in Cobh and sailed slowly upriver where it turned in the channel near the Naval Base. Thousands of people braved a cold wind and lined the quaysides and hills of Cobh as this legendary and majestic liner sailed downriver and into the history books. Many a white handkerchief was to be seen and many have been sent to Irish people in all corners of the globe as a souvenir of this magnificent day.

Here are a few interesting facts on the Grand Old Lady of the Seas.

The QE2 is undoubtedly the most famous Liner in the World. It was built as a Trans-Atlantic liner, not as a Cruise ship.

The QE2 is almost 40 years in service.

It has completed over 800 trans-Atlantic crossings.

She has completed 24 Full World Cruises.

She has travelled 5½ million nautical miles (that’s to the moon and back 13 times)!

She has carried over 2.1 million guests.