Jack Doyle (31 August 1913 in Cobh, Ireland – 13 December 1978 in Paddington, London), known as “The Gorgeous Gael” was at one time or another a contender for the British Boxing Championship, a Hollywood actor and an accomplished tenor. 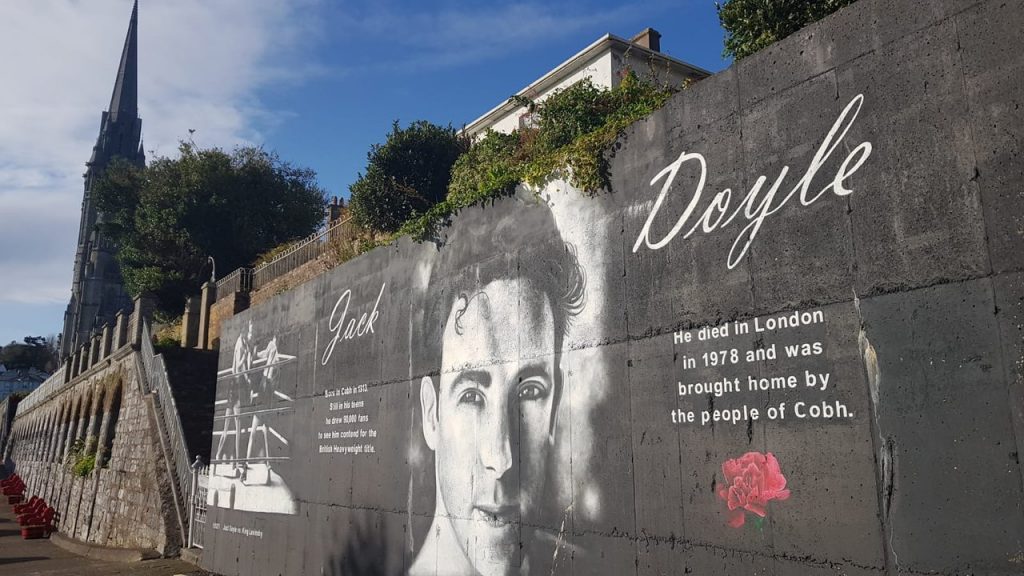 He was born into a working class family in Cobh, in County Cork, Ireland in 1913. At 6 foot 3 Doyle was always good with his fists and in 1929 he joined the forces of the Irish Guards based in Wales. There he quickly excelled at boxing and was famed for his strong hooks that won him the British Army Championship.

A sensational record of 28 straight victories, 27 by knockout, brought him to the attention of promoter Dan Sullivan. He turned pro and notched up 10 victories on the trot all inside 2 rounds, making him the hottest thing in the sport.

In July 1933, at the age of 19 he missed out on the British Heavyweight title to the holder, Welshman, Jack Petersen. Witnesses claim that he had done most of his warming up in a pub not far from the bout. Within the opening seconds he knew he was in trouble and decided to take the easy way out. He was disqualified for repeatedly punching low.

Shortly after, his singing voice was discovered by Dr. Vincent O’Brien, teacher to Count John McCormack and soon his soft tenor voice and handsome looks were selling out the London Palladium and the Royal in Dublin. Jack was subsequebtly signed up by Decca and several 78 records were produced including the popular “South of the Border” a duet recorded with his then wife Movita. But his love for the drink and generous nature soon started to take its toll on his health.

He travelled to America in 1934 and soon carried on his high living of gambling, ladies and drink. His good looks and deep pockets opened up the party circuit to him and he even managed to land the starring role in two movies, McGlusky The Sea Rover (1934) and Navy Spy (1937).

While in the States he continued to box, taking on one Buddy Baer in August 1935. Like his fight against Jack Peterson it is said that Doyle had consumed the best part of a bottle of brandy before the bell rang and was in no fit state to stand. He was knocked down loaded in the first round.

He returned to Ireland with this new girlfriend Movita Castaneda (having recently split from his wife Judith Allen), a member of the Mexican aristocracy and Hollywood starlet. Following a celebrity wedding in Dublin’s Westland Row Church they toured both sides of the Irish Sea, selling out music halls and opera houses.

Around this time Jack fought his last professional fight, against a journeyman called Chris Cole in front of 23,000 in Dublin’s Dalymount Park. Arriving late for the bout after a stop at The Clarence Hotel for refreshments, the inebriated Doyle went down in the first. Movita packed up and moved back to Hollywood where she married Marlon Brando.

Shortly after Doyle found himself residing at Mountjoy Jail in Dublin for knocking out a Garda Detective in a Ranelagh pub. He moved to England and his spiral downwards into alcoholism and bankruptcy continued. He found his friends had deserted him as fast as his bank balance, spent in his own words on “slow horses and fast women”. He odd-jobbed for while but when he couldn’t afford the rent on his humble flat he took to sleeping at the homes of friends, in Pimlico, London, SW1. His only source of income during this time was an allowance he received from Movita.

He died in 1978 at St. Mary’s Hospital in Paddington and was buried in his native Cobh in the Old Church Cemetery. Shortly before his death, he was interviewed by a journalist who asked him had he any regrets about not spending his money more wisely. “None at all,” he said, “twas never a generous man went to hell.”

A Short Video on Jack: watch?v=NlhjfDBnhy8