After a two years absence, Cobh will hold the first public ceremony of remembrance for all who lost their lives in the Titanic disaster

On Sunday 10th April 2022, Cobh will commemorate the 110th anniversary of the sinking of Titanic.  The East Cork town, which was the famous ship’s last port of call, is inviting the public to gather and remember all those who died when the ill-fated ship sank on her maiden voyage to New York in 1912.

The ceremony which is an annual event featuring music, prayers and wreath laying is organised by Cobh Tourism will start at 2.30pm in the centre of town at the Titanic Memorial in Pearse Square.

Dignitaries, Cobh locals, those with maritime connections or historical interest and the general public are invited to attend and join in the commemoration. A Colour Party from the Cobh Irish Naval Branch O.N.E. will parade from the Old Town Hall at Lynch’s Quay to the Titanic Memorial in Pearse Square where a ceremony of prayers and wreath laying will take place along with musical honours provided by the Commodore Male Voice Choir.

Proceedings will then move to the Promenade where the names of the 79 passengers who boarded the Titanic in Cobh on 11th April 1912 and who perished in freezing waters of the North Atlantic less than four days later, will be read out. A wreath will then be placed in the sea in memory all those lost in the tragedy. The ceremonies will conclude with Cobh Confraternity Band’s poignant rendition of the Last Post and Reveille.

This year’s event has added significance as it will be the first public event held in two years due to Covid19 Health restrictions and because it marks the 110th anniversary of the maritime tragedy. Throughout the height of the Pandemic Cobh Tourism Board ensured that the traditional commemoration was still held, albeit scaled back to a solo representative and held at dawn to ensure it would be done in a quiet and solemn way. 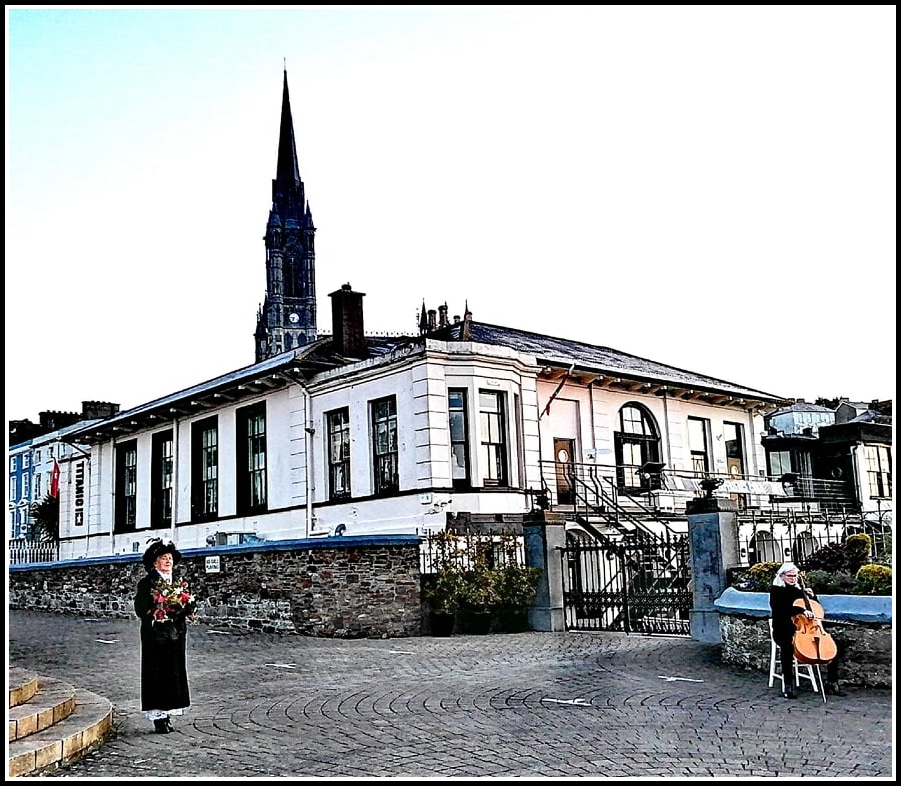 Mona Kennedy of Cobh Animation Team prepares to place a wreath in the sea to commemorate lives lost on board RMS Titanic as cellist Ruth Ring plays Nearer, My God, To Thee on 11th April 2021.

Speaking ahead of the commemorative ceremony, Board Member of Cobh Tourism Hendrick Verwey said “Cobh is a beautiful, scenic town with a rich maritime history and the Titanic story is deeply engrained in our local identity. Being able to gather once more for this significant 110 year commemorative ceremony is another small but significant step for the town in regaining some normality after the challenges of the pandemic.”

In a further sign of Post Covid recovery for the historic coastal town, organisers and delegates from the British Titanic Society will travel from the UK and stay in Cobh for 4 days as they host their 35th annual convention from the 7th to 10th of April. The event series will feature tours and lectures by Titanic scholars as well as a Gala Dinner for their members, providing a welcome tourism boost ahead of the Easter break.

The colourful town of Cobh is famed as the last port of call of the Titanic.  All year around, you can visit the town’s Titanic Memorial Garden, which is situated on the waterfront overlooking The Titanic’s final anchorage.  Here you will see a Glass Memorial wall which bears the names of the 123 passengers that embarked in Queenstown.  The town also has a Titanic Memorial in the town square, dedicated to the 79 passengers who boarded The Titanic in Cobh on 11th April 1912 and lost their lives. And there are several fascinating museums and heritage centres dedicated to The Titanic story, including Cobh Heritage Centre and The Titanic Experience and the Titanic Trail Walking Tour departs daily all year round from the Commodore Hotel at 11am.