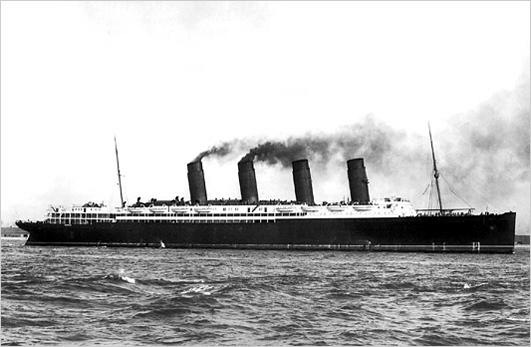 The commemoration of the 104th anniversary of the sinking of the Lusitania will take place in Cobh on Sunday 5th May, 2019. Organised by Cobh Tourism the ceremonies are fitting memorials to all those who lost their lives on that fateful war time voyage.

The ceremony commences at the Lusitania graves in the Old Church Cemetery just outside Cobh at 2.30pm. Following prayers, musical honours by the Comodore Choir and the laying of wreaths, the proceedings move to Cobh Town Centre. A Parade led by a Colour Party from the O.N.E. and representatives of the Royal Naval Association and other maritime and historical groups will leave from the Old Town Hall on Lynch’s Quay at 3.15pm approximately to the Lusitania Peace Memorial in Casement Square.

Members of the public are encouraged to attend.

History of the Tragedy

On May 1, 1915, under the command of Captain William Turner the R.M.S. Lusitania left New York on her 202nd crossing of the Atlantic. The German government decided to warn passengers not to sail aboard Lusitania before this crossing. A prepaid warning advertisement was placed in fifty East Coast newspapers, including those in New York. This advertisement was to be put on the paper’s travel page a full week before the sailing date. However the advertisement only appeared in one newspaper, the Des Moines Register.

On May 7th, the Lusitania came into sight of the Irish coast. An Admiralty warning had been issued of submarine activity in the area. Captain Turner heeded this warning and put prudent precautions in place. Watertight doors were closed, double lookouts were posted, a black-out was ordered and the lifeboats were swung out on their davits so they could be quickly put into the water.On 7th May 1915 the Cunard liner Lusitania sank after being struck by a torpedo fired by the German Submarine U-20 off the old Head of Kinsale. Of the 1257 passengers and 702 crew on board, more than 1100 people died, including almost a hundred children. At around 13.45, the Lusitania was spotted by U-20. A torpedo was fired at 14.09. At 14.10, the German Commander Schwieger noted in his log that Lusitania was hit on the starboard side behind the bridge. A second explosion occurred soon after but the Germans insisted that only one torpedo was launched. The Lusitania started to list immediately and this list complicated the launch of her lifeboats. Of the forty eight lifeboats only six were successfully lowered. Just eighteen minutes later the Lusitania sank.

There was understandable anger throughout America and Great Britain at what was considered an act of brutality. 128 of the passengers and crew who drowned were American. Many consider the sinking of the Lusitania to be a contributing factor to the United States eventually entering the War.

Among those who died was renowned Irish art collector Sir Hugh Lane and millionaire Alfred Gwynne Vanderbilt. Most of the 764 people who were saved were landed in Cobh. Only 289 bodies were recovered and 170 of these were buried in the Old Church Cemetery in Cobh in three mass graves and 20 individual plots. Forty five of those buried were unidentified and their coffins were merely marked with a number.

You can view an historical video clip of the Lusitania by clicking here .

The tragedy of the sinking of the Lusitania is commemorated each year by Cobh Tourism. It is a fitting memorial to all those who lost their lives on that fateful war time voyage. It takes place at the Lusitania graves in the Old Church Cemetery and at the Lusitania Peace Memorial in the town centre.

The 2010 commemoration will take place on Sunday May 9th at the Lusitania Graves at 2 pm and in the Town Centre at 2.30 pm.