Cobh to remember Titanic passengers and crew on 104 year anniversary 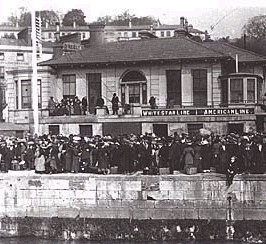 On Sunday 10th April 2016, people will gather in Cobh, the last port of call of the Titanic to remember all those who died when the ship sank, but in particular the passengers who boarded in Cobh. The ceremony which is an annual event organised by Cobh Tourism will start at the later time of 3.30 pm in 2016. A Colour Party from the Cobh Branch O.N.E. will parade from the Old Town Hall at Lynch’s Quay to the Titanic Memorial in Pearse Square. A ceremony of prayers and wreath laying will have musical honours provided by the Commodore Male Voice Choir. Wreaths will be laid at the Titanic Memorial before the proceedings move to the Promenade.

Here the ceremonies will continue adjacent to the pier where passengers boarded the tenders to take them to the Titanic. The names of the 79 passengers who boarded the Titanic in Cobh on 11th April 1912 and who perished in the freezing waters of the North Atlantic less than four days later will be read out. A rendition of “Nearer My God to Thee” by the Cork based MUSICA Orchestra at this time will add poignancy to the proceedings as this hymn is popularly believed to be the last music played by the Titanic’s band as the ship sank.

A wreath will be placed in the sea in memory all those lost in the tragedy and the ceremonies will conclude with Cobh Confraternity Band’s rendition of the Last Post and Reveille.

Members of the public are encouraged to attend the Titanic Commemoration.

On 11th April 1912, Queenstown was the final port of call for the Titanic as she set out across the Atlantic on her maiden voyage. The 123 passengers boarding at Queenstown left from the White Star Line pier aboard the tenders Ireland and America which ferried them to the liner at anchor near Roche’s Point. Three were traveling first class, seven second class and the remainder steerage. Renowned photographer Fr. Frank Browne had traveled on the ship from Southampton and disembarked at Cobh. His photographs were the last taken on the Titanic.

In 2013 a Titanic Memorial Garden was opened in Cove Fort at the eastern end of Cobh Town. This secluded historic fort has spectacular views over Cork Harbour and overlooks the last anchorage of the Titanic. A Glass Memorial Wall within the garden has the names of the 123 passengers who boarded in Cobh and also a memorial stone to Bruce Ismay, the chairman of the White Star Line who was travelling on the Titanic when it sank.

At the time Titanic was the largest and most luxurious liner afloat. At 882 feet long, 92 feet wide and weighing 46,000 tons it was powered by 29 coal-fired boilers which burned almost 700 tons of coal a day. Although it is dwarfed by today’s cruise liners it still ranks as one of the most famous and recognisable liners of all time. The facilities available to second class passengers were better than those of first class passengers on competing vessels. On this voyage there were over 2200 passengers and crew aboard. There were merely 1178 lifeboat spaces!

The RMS Titanic struck an iceberg shortly before midnight on 14th April 1912. Just over two hours of terror later the Titanic sank and almost 1500 people died in what is the most widely reported shipping disaster ever. Despite the freighter Californian being within 20 miles of the Titanic all night the ship’s radio operator was off duty and didn’t pick up the distress signals from the Titanic. The crew was therefore unaware of the unfolding disaster nearby. The first ship to arrive at the scene of the now sunk Titanic was the Cunard liner Carpathia. She picked up over 700 survivors and brought them to New York.

A year after the disaster, the first International Convention for Safety of Life at Sea was held in London. The convention made rules requiring that every ship have lifeboat space for each person onboard and that ships maintain a continuous radio watch.

On 1st September 1985, the wreck of the Titanic was found lying upright in two sections approximately 400 miles south of Newfoundland at a depth of almost 13,000 feet. Subsequent exploration of the ship by manned and unmanned submarines under the direction of American and French scientists found no sign of the long gash thought to have been ripped in the ship’s hull by the iceberg. It seems that a series of thin gashes as well as the separation of joints in the ship’s hull allowed water to flood in.