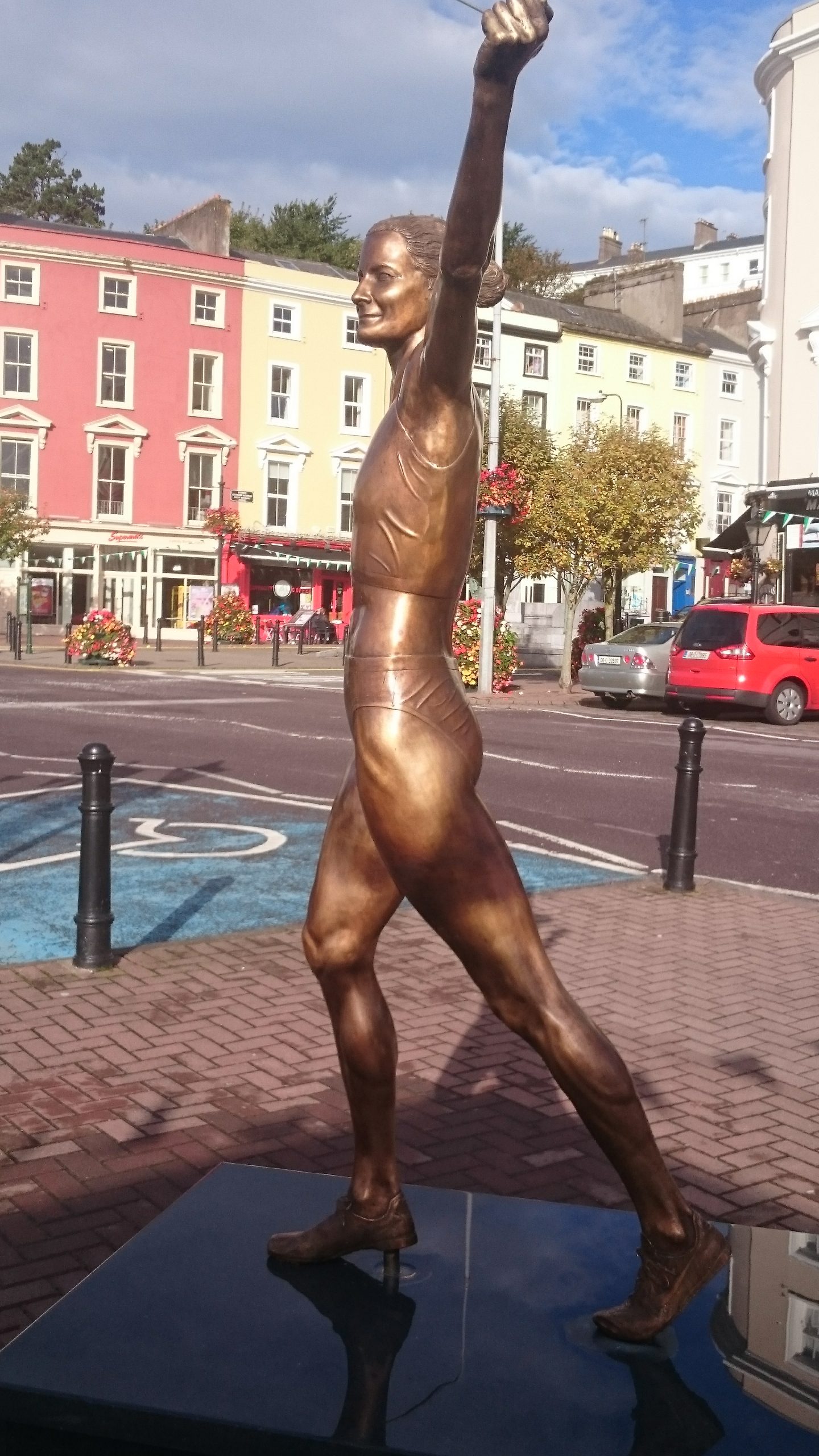 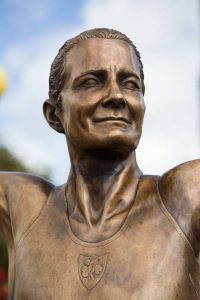 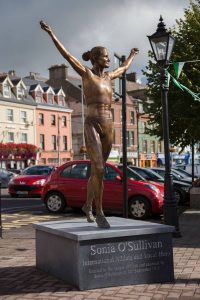 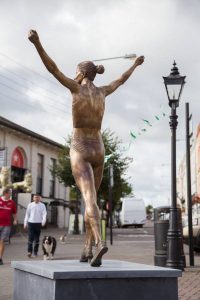 It was teeming with rain in Cobh on the afternoon of Sunday 20th September 2015. Despite this a large group of good humoured people gathered in the centre of town to see and be a part of the unveiling of the Sonia O’Sullivan statue.

The statue was commissioned by Cobh Tourism to celebrate and acknowledge the achievements of Sonia over a long and glittering career in athletics. The fundraising was completed within two years through a mix of donations, fundraisers by many clubs and organisations and the generous support of the people of Cobh.  This allowed the statue to be unveiled to mark the twentieth anniversary of Sonia winning gold in the 5000m in the World Championships in Gothenburg.

The signature fundraisers, organised by Cobh Tourism itself were Strictly Cobh Dancing and Rebecca O’Connor’s Tina Turner, Simply The Best concert and these will long be remembered as fantastic nights in Cobh and will forever be associated with this statue. Details of Strictly Cobh Dancing 2016 will be announced shortly!

The statue of Sonia was painstakingly crafted by local sculptor James McLoughlin and is a perfect representation of Ireland’s greatest ever athlete at the peak of her career in the 1990’s.

In her speech, Sonia spoke about how this day was a really special day for her and her family. “This statue isn’t really about me, this statue is about everybody who has supported me and probably got me to this point in time.” Sonia spoke of the two Cobh businesses, BMC and Clona Milk that were her first sponsors when she started to travel away to races shortly after she was more than just “a normal little girl running around the streets of Cobh.” “Every time I came home from an event people came out, hail, rain or shine to greet me and welcome me home”, Sonia continued. With the statue now in place “whether I am in Cobh or not a little piece of me will always be here now.”

There were many young children in the assembled crowd and Sonia spoke of how she hopes that they will take some inspiration from the statue. “It represents what can be achieved if you work really hard, it doesn’t have to be in running or in sport, it can be in whatever you decide to do – you set your goals high and you chase your dreams and you do the best that you can to achieve them,” she said.

Once the statue was unveiled a virtual sea of people wanted their photo taken with Sonia and her statue as they reminisced about their memories of Sonia as schoolgirl from Cobh right through to the present day. Sonia’s endurance, both as an athlete and much loved personality shone through, as one hour later she still posed with well-wishers and later continued to mingle comfortably with the assembled guests at a reception in The Commodore Hotel.

As the sun went down on yet another memorable day in Cobh, James McLoughlin and Cobh Tourism were basking in the glory of a job well done, a super athlete honoured in her hometown, Cobh in the National spotlight yet again and a magnificent piece of public art on show for all to see and enjoy.

However we live in another age now and on the strength of having seen a poor photograph of the newly unveiled statue taken on a phone and posted on Twitter “keyboard warriors” set out to denigrate the work of a super talented artist.

To their credit, the people of Cobh and Sonia herself grasped the opportunities offered to explain that this statue needs to be seen in person to appreciate just how good it is and that the only way to do this was to visit Cobh. Cobh Tourism always believed that no one would travel to Cobh specifically to see this statue. On that we were wrong!

The Sonia O’Sullivan Statue committee within Cobh Tourism are Pat O’ Shea, Paul O’Halloran, Tony Nolan, Ursula Duffy, Belinda Shaw, Hendrick Verwey, Jim O’Rourke and Jack Walsh. Their vision, commitment, determination, professionalism and energy must be applauded for delivering something that others only talked about doing.

We acknowledge the assistance of John Walsh and John and John Paul Reilly when putting the statue in position, the Band of 1 Southern Brigade for performing prior to the unveiling and Dan Noonan of D2K for the sound system at the unveiling ceremony.