Cobh Tourism is unveiling a life size bronze statue of local hero Sonia O Sullivan in Cobh this Sunday, and they are inviting the public to join them in the honorary celebration.

The statue will be unveiled by Sonia herself at 3pm, who will be accompanied by her family and friends including husband Nic Bideau and their children Ciara and Sophie.

Commissioned by Cobh Tourism, the statue is situated in the centre of the town, close to Titanic Experience Cobh, with the iconic St. Colman’s Cathedral in the background, and it will provide a great photographic opportunity for visitors to the town.

Chairman of Cobh Tourism, Hendrick Verwey commented “This statue captures the determination and spirit of Sonia and celebrates her achievements over a long and glittering career. It also conveys the immense pride that the people of Cobh and Ireland have for our greatest ever athlete.  We hope the public will come along in their droveson Sunday to honour a great local hero.”

“The pose chosen, minute detail and the immense talent and patience of Cobh sculptor, James McLoughlin, means that this statue will tell its own story to visitors and locals alike”.

Hendrick explained that “tourists want real experiences – they want to get a feel for a place, understand the story of a town and its people, and what makes it tick. Cobh is full of experiences and stories, but the story of Sonia O’Sullivan and her athletics career, her tremendous successes, many disappointments and the trials and tribulations of a glittering career is a story that carried the people of Cobh and Ireland along with her for over a decade. It is a happy story and this statue will reflect that, celebrating a Cobh native who has been a tremendous ambassador not only for her sport but for her home town Cobh and Ireland.”

Cobh Tourism led the campaign to acknowledge Sonia O’Sullivan’s achievements in her home town. The support of Cork County Council, Cobh Credit Union, local businesses and clubs and organisations made the statue a reality in a very short time.

An Athletics Ireland 5k Road Race will be held in Cobh on Saturday 19th September and all competing athletes will receive a replica of the gold medal that Sonia won in the 5000 m at the World Championships in Gothenburg in 1995. Registration can be completed here http://sonia5k.ie/cobh/. 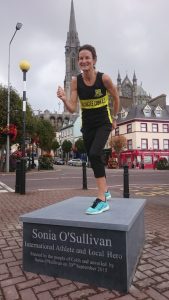 Cobh Tourism hope that the public turn out in huge numbers to support the Sonia 5k Road Race on Saturday 19th  at 6pm and the unveiling of this magnificent work of art right in the centre of the beautiful town of Cobh on Sunday. With the town bedecked in bunting, the Band of 1 Southern Brigade will be on hand to entertain from 2.30 pm.

Cobh Tourism led the campaign to acknowledge Sonia O’Sullivan’s achievements in her home town. The following contributed to the Sonia Statue Fund (in order of donation)

Sonia was also extremely successful in the Grand Prix Athletic circuit and at her peak consistently finished in the top three positions. She also held the Irish national records for every distance from 800m right through to the half marathon at some point in her career.