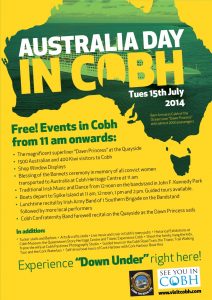 A cruise ship full of Aussies and Kiwis means a celebration in Cobh of "down under right here".
The Dawn Princess is on a 104 night world cruise that left from Sydney on 18th May and it will sail back past the Sydney Opera House in the early hours of 31st August after visiting 39 ports.
The almost 2000 passengers including 1500 Australians and almost 400 Kiwis and are in for a real Irish welcome, Australian themed shop window displays, food, craft and travel stands, traditional music, Irish dancing, the craic in the pubs, the Irish Army Band of the first Southern Brigade and a magical sendoff from the quayside with the Cobh Confraternity Band. Cobh has featured as a port to remember on the previous world cruise itineraries and despite this being a Tuesday, the organisers of the event, Cobh Tourism and See You In Cobh are confident of another successful and enjoyable day for the passengers and locals alike.
At 11 am in Cobh Heritage Centre, there will be a Blessing of the Bonnets ceremony in memory of all convict women transported to Australia. Almost 25,000 beautifully embellished bonnets have been made throughout the world as a tribute to each of the women and children transported from the British Isles between 1788 and 1853. This will have a significant resonance with many passengers. Guest speaker will be Cal McCarthy who wrote "The Wreck of the Neva" – a historical account of the convict ship that sailed from Cork and hit a reef just north of King's Island in Australia and sank with the loss of 224 lives. Those women and children are remembered in a permanent installation in Cobh. 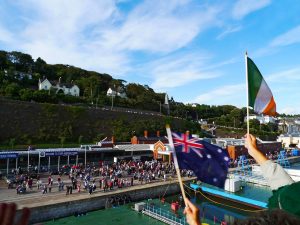 A highlight of previous world cruise visits was the atmosphere of the sailaway with a Brass Band send off from Cobh Confraternity Band. Despite the current scheduled sailing time of 4 pm, the band members will again oblige and make for an unforgettable occasion as the Dawn Princess continues its odyssey around the world.
The programme of entertainment is as follows
From 9am Food and craft stalls with flag sellers and good cheer abounding
10.30am Pubs oficially open!
11am Blessing of the bonnets ceremony at Cobh Heritage Centre. Cruise passengers invited to lay blessed bonnets in the boat
11.45 am Traditional Music with Luasca in Cobh Promenade
12.15 Irish Dancing display with Aoife Ryan's Irish Dancers
12.45 Ukele band takes to the stage
1.30pm Irish Army Band of first Southern Brigade on the Victorian Bandstand in the Promenade
3.30pm Cobh Confraternity Band perform on the quayside for a fond farewell recital