Cobh to remember Jack Doyle: The Gorgeous Gael this weekend 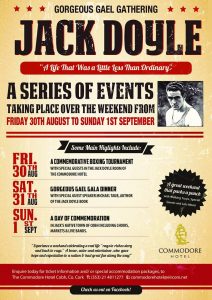 On the weekend that Jack Doyle would have undoubtedly celebrated in style his 100th birthday, a weekend of interesting and entertaining events are planned in his native Cobh.

Further information on all events and tickets are available from the Commodore Hotel Tel 021 4811277.

The line up of events is as follows:

7.00pm: Official Launch of the Gorgeous Gael Weekend in the band stand of the Promenade. Live entertainment will be provided by the Cobh Confraternity Band

One hundred balloons will be released to mark each year since Jack Doyle’s birth (Proudly sponsored by Jack Doyle’s Bar , Top of the Hill)

11am – 6pm: Exhibitions & talks from John Hennessey and Willie O’Leary,

12pm : Official unveiling of the Gorgeous Gael Mural, by Michael Taub, author of the biography Jack Doyle: The Gorgeous Gael. This mural is to mark the centenary of the birth of Jack Doyle and is a Cobh Tidy Towns project in partnership with Jack Hickey who painted this mural.

1.00pm Street Theatre with “Queen Victoria” in the Promenade (F/O/C)

2.00pm: Street Theatre with the “Stoning of James Connolly” in the town’s main square (F/O/C)

3.30pm: Walking Tour to the Holy Ground- Jacks Birthplace. Tour is leaving from the steps of the Commodore Hotel and is free of charge, provided by the Residents Association of the Holy Ground presented by Christy Keating & Marita Foster.Transport provided by Cobh Road Train at the discounted rate of €3 return

4.30pm: Walking Tour to the Holy Ground- Jacks Birthplace. Tour is leaving from the steps of the Commodore Hotel and is free of charge, provided by the Residents Association of the Holy Ground presented by Christy Keating & Marita Foster. Transport provided by Cobh Road Train at the discounted rate of €3 return

Books are available for sale at the discounted price of €16.00.

With a capital P for Party enjoy an evening Jack himself would be proud of. The evening kicks with off local tenor Ryan Morgan accompanied by Alan Carney, Enjoy a four course meal with special guest speakers including Michael Taub, and Chris Doyle- jacks nephew. Dance the night away with “The Contenders”. Tickets are available at the Commodore Hotel reception for only €34.95.

12.00pm: Remembrance Mass in St. Colman’s Cathedral. The boxers prayer will be read in memory of Jack Doyle & John Daly will perform “The Contender”.

Following mass there will be a parade to the Mural, for a minutes silence, led by the Colour Party of the O.N.E. The local Animation theme will also be in attendance. The parade will conclude at the Jack Doyle Monument in the Promenade

1.30pm: On arrival at the Jack Doyle Monument a mark of respect will be made on behalf of the people of Cobh by M.C. ex Mayor, Jim Quinlan co-ordinated by Cobh Tourism.  Music will be provided by the Commodore Choir & local legend Jimmy Crowley.

2.30pm – 4.30pm:  Tour of the Old Church Graveyard- Jack’s final resting place. This will be carried out by local historian Jack Gilmartin and is provided free of charge

4.00pm:  The Jack Doyle Play- produced by Kate Cullinane Perryman and starring local actor & writer Luke Barry. Located in the Jack Doyle Room, tickets only €5 and are available at the door.