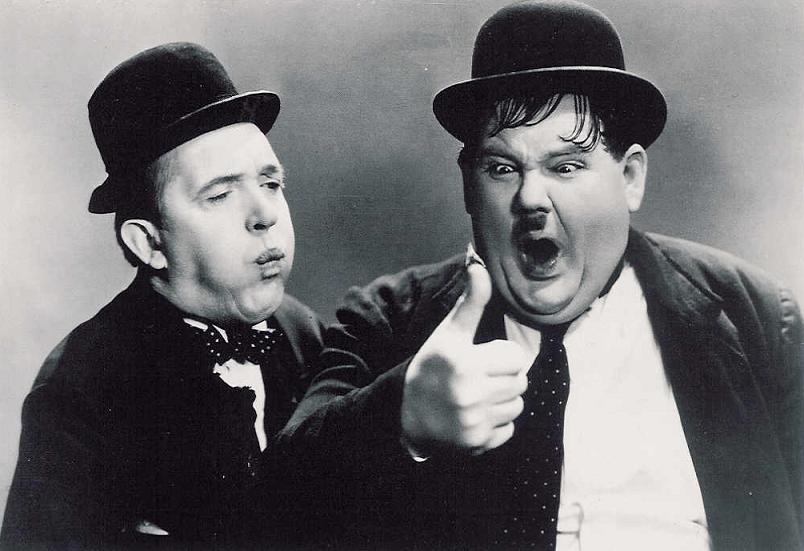 It must be recorded that the Laurel and Hardy visit to Cobh in 1953 has become the most high-profile episode involving the Cobh Carillon and has spread the fame of the instrument far and wide. Almost every book about the comedians mentions it, the event was warmly recalled in the “This Is Your Life” show the following year (1954), it has been the subject of countless radio and television features and is frequently quoted in newspaper and magazine articles.

The story begins in the picture palaces of Antwerp back in the early 1920’s, when my father (Staf Gebruers, 1902-1970), then a impecunious young music student, earned much needed pocket money as a temporary cinema pianist and thus was planted the seed for a life-long passion for stars of the silent screen. Fast forward to Cobh some thirty years later, where news was trickling through that Laurel and Hardy had boarded the U.S. Lines liner SS “America” in New York bound for the Emerald Isle. Whereas the duo’s departure from the Big Apple had not attracted much attention, the people of Cobh were veritably tingling with excitement at the prospect of seeing them in the flesh, particularly on the part of the younger members of the population.

If the truth were to be told, the comedians were no longer that popular in the land that made them and this European campaign was an attempt to revive their waning fortunes, with Ireland being selected as a starting point.

On the morning in question, a little drama was unfolding at St Joseph’s Boy’s Primary School. As a ten year old pupil, I was not only a first-hand observer but very much a participant in these events. The thought that our favourite film comedians might be a stone’s throw away down town while we scholars sat in our classrooms was more than any human beings could be asked to endure. We therefore took advantage of the morning yard break to petition the school principal to allow us out to see the film stars. As at that stage the ageing Br Eugenius was probably not in the best of health, the collective pressing of hundreds of over-excited boys was probably more than he could take. Moreover, as he instinctively backed away from the onslaught we inadvertently were responsible for pressing him up against the school building, just alongside the white statue of our holy patron as it happened. In what the poor brother might well have considered to be one

of his last breaths, he just about managed to gasp out the words we longed to hear: “Alright, you can go down to see them.”

Housewives going about their daily shopping on The Beach, Cobh’s main thoroughfare, first thought they were detecting the sound of distant thunder, but with the addition of youngsters’

exuberant voices it soon became obvious that the town’s schoolchildren were rushing down West View hill en route to the railway station where passengers from the liners disembarked. As my best friend was Seán O’Mahony and his parents managed the Royal Cork Yacht Club, I was able to get on to the balcony of the building, which commands a fine close-up view of the harbour. When the tender taking the passengers ashore from the liner passed we waved and shouted and

repeatedly rang a ship’s bell in welcome, just as everyone else of the thousands lining the waterfront were similarly engaged. The two film stars were completely taken aback by the sheer ecstasy of their reception and in the years left to them never tired of reminiscing about that Wednesday, September 9 1953:

“The docks were swarming with many hundreds of people. ‘It’s strange, a strange thing,’ Stan says in recalling that day, ‘our popularity has lasted so long. Our last good pictures were made in the thirties, and you’d think people would forget, but they don’t. The love and affection we found that day at Cobh was simply unbelievable. There were hundreds of boats blowing whistles and mobs and mobs of people screaming on the docks. We just couldn’t understand what it was all about. And then something happened that I can never forget. All the church bells in Cobh started to ring out our theme song, and Babe looked at me, and we cried. Maybe people loved us and our pictures because we put so much love in them. I don’t know. I’ll never forget that day. Never”.

When the two celebrities stepped ashore in Cobh they were immediately surrounded by good humoured milling crowds, all wishing to catch a glimpse of them or even shake their hands or get an autograph. The few local Gardaí fought a losing battle to speed them through immigration and customs formalities and out to a waiting car, and there was some considerable delay before they eventually emerged from the railway station to more cheering masses of fans. Ollie did not look

a well man that morning, but in spite of how he might have been feeling he and Stan were insisting on personally thanking “the bell-ringers”. Like most people, they knew next to nothing about carillons and even less of how they’re played. When Seán O’Brien, manager of the U. S. Lines and a personal friend of my father’s, explained that this was an instrument played from a keyboard by one man they were even more anxious to make his acquaintance. A few minutes

later, Seán’s car sped around Cathedral Corner followed Pied-Piper like by hundreds of screaming children. My father was at the main entrance, where I had joined him standing shyly a few steps behind. My first reaction was one of disappointment as these two elderly gentlemen dressed in modern lounge suits alighted, only vaguely resembling their far more familiar screen personae. But even worse confusion was to follow. When Ollie went to take my father’s hand to thank him the accumulated emotion of that whole morning seemed to suddenly spill over the poor man and words failed him. Tears began to roll down his cheeks as he engulfed Dad in his not inconsiderable embrace. Alarmed that my father, who in these politically-correct days would be termed vertically-challenged, might not come out intact from that massive bear hug, I was even more unnerved by Stan’s contrasting total composure as, dryeyed, he repeated polite words of appreciation. Shouldn’t he be the distraught one, wringing his hands and bawling crying as Olie yet again admonishes: “That’s another fine mess you’ve gotten us into.”, when in fact the reverse seemed to be the case! But there was no denying the sincerity of the film stars’ gratitude. Having their theme played on the Carillon and the great warmth of the welcome they’d witnessed in Cobh was a genuine public acknowledgment of the innocent fun they had given to millions which seemed to deeply touch them and was to become a landmark experience in their twilight years.

The above story was sent to me by the author who has told me that it is only a part of what happened that day. He revealed that he alone is probably the last one to know what really happened and would probably never tell. I quizzed him for some time and tried to persuade him to part with the details one day but he was quite resigned to the fact that the story would die with him. I didn’t even get a slight clue as to what it was and I am very intrigued. Perhaps one day….